As time passes, the vitreous tends to degenerate, collapse on itself and eventually detach from the retinal surface. If the vitreous detaches from the retinal surface and leaves the macular area, with the central area now being completely naked, then the formation of membranes on it can occur. These membranes, of a non-inflammatory nature but of a pseudo-reparative nature, have the characteristic of growing on the retinal surface and, as a negative note, cause visual distortion. The retina, which in itself can be safely naked and therefore not covered by the vitreous, but now has a membrane on its surface, can now develop edema because this membrane may begin to contract and create alterations, wrinkles and create the possibility of forming fluid.

Recent studies done with Angio OCT have shown that unrecognized and untreated epiretinal membranes favor the development of local ischemia in the macula, therefore the epiretinal membranes, according to the latest dictates, must be diagnosed and removed as soon as possible. This means that the surgery of the epiretinal membranes should not be postponed but must be performed as soon as possible, and although this of course must be evaluated from case to case. In theory, everything that is a membrane that grows on the retinal surface, can cause local ischemia and distortions, can be with the patient for life if not removed through surgery.

Modern vitreoretinal surgery allows us to operate on these patients and restore perfect vision to them, especially if the surgery is performed with a minimally invasive technique and at an early stage.

The macular hole, on the other hand, is a pathology of the macula in which the vitreous has not detached but remains very attached to the central area, to the fovea; being very adherent and coercing (i.e. moving backwards, pulling on the surface of the retina) creates the possibility of the formation of the macular hole, which is much faster than macular pucker (i.e. the epiretinal membrane) in its formation.

The macular hole can also form within a week / fifteen days: the patient begins to see slightly distorted and cannot see in the central area of ​​the visual field, until then a scotoma forms, which is an absence of the vision of the central area.

This is the macular hole in its various stages, due to the traction of the vitreous on the central area.
It must be diagnosed quickly and decided with the ophthalmologist which path to take.

There is a drug to be inserted inside the vitreous cavity which favors the detachment of the vitreous from the central area, hence the non-formation of the macular hole.

Then there is vitrectomy, which, especially if minimally invasive, is the treatment to be performed in the macular hole, which is an absence of retinal tissue in the central area and is an acute, urgent and absolutely disabling pathology. This is an operable pathology with a very high margin of success, especially if operated in its initial stages and with a minimally invasive vitrectomy, therefore with small holes and very little aggressive technologies.

It is not clear what determines the formation of the macular pucker (also referred to as epiretinal membrane): it can occur spontaneously, more frequently after 50 years and may be secondary to inflammatory processes, after retinal detachment or laser treatment. The epiretinal membrane (or macular pucker) is a disease affecting the eye in the border between the vitreous and macular area, that part of the central retina that deals with detailed vision, such as reading or driving a vehicle. 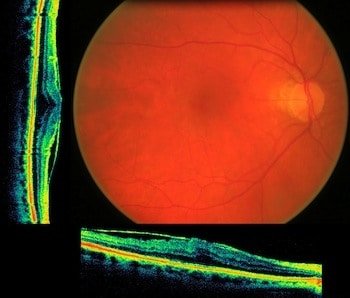 The inner limiting membrane which normally delimits the boundary between the vitreous and the retina, thickens and tends to wrinkle for the cell proliferation along the inner surface and the production of fibrous tissue by the accessory cells to the retina.

They determine tractions that generate radial folds and alter the normal course of the retinal vessels causing disorders to metabolic exchange with a consequent thickening of the macula. The visual impairment can vary greatly, from none to severe with a very slow period of evolution. The patient generally experiences a blurred vision, a distortion of the images (metamorphopsia), sometimes diplopia (double vision).
The main symptom which consists the deformation of images is identified with the Amsler test, a grid on which the patient draws the distortion of the perceived images.

The Center of Dr. Alberto Bellone is one among the Centers of Excellence for the diagnosis and treatment of macular pucker.

Epiretinal membrane therapy is surgical and is based on vitrectomy (removal of the vitreous body), peeling of the pucker and the internal limiting membrane.

With surgery, it is possible to achieve retinal integrity: this results in improved visual capability with reduced symptoms such as blur and image distortion.

Epiretinal membrane removal is performed in local anaesthesia and does not require hospitalization. It is almost painless, with a quick return to social life.

The Center of Dr. Alberto Bellone is a Vitrectomy Center Of Excellence for the diagnosis and treatment of macular pucker.
Apri chat
1
Scan the code
Come possiamo aiutarla?
Call Now Button